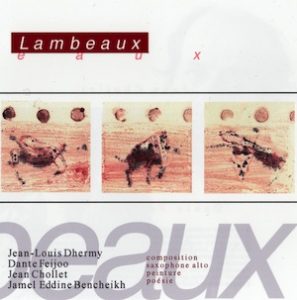 dedicated to my son, 9 months , Amaël

Lambeaux originates in a encounter with Jean Chollet, painter, and in the knowledge of the poem composed by Jamel Eddine Bencheikh, after having seeing his pictures.

Detail’s and structure’s alliance, the impulse of certain features, the rapidity of the brush, the transparency of such a color, the substance that one’s guess, perpetual transformation of motions, of graphism, either slowly or more abruptly…All of these characters amply

The mystery of the signs remembering ancient or imaginary writings made me going back in time to the origin of human life : language’s early beginnings, cried, shouted, being articulated, whispered, spoken, written. A origin came to light. Something sacred imposed on me.

The five parts of Lambeaux represent differents aspects of the same idea.

Ritual is marked with bells sounding in a closely space, a imaginary and secret place…in any case, ceremonial.

With the voice of Jean Chollet

An environment of meditation, resonances disappearing, some rough, timeless evolving bells mark the poem, induce it… Some images are going on, others impose on us more or less durably… First vision, confidentially.

Some bursts… Of sounds, of breath, of respiration, of gasping, orchestrated or not, insistant rhythmics… Whirlwinds.  An imaginary language… Breath gives birth to sound.

With the voice of Jamel Eddine Bencheikh

A choir goes on here and there… Polyphonic rhythmics with polar tonality.

With the voice of Jean-Louis Dhermy